Here's the story from Great Britain. Remember, this is one of the countries our fearless leaders are so hot for us to emulate.

If you don't believe it can happen here, how's YOUR mandatory 1.5 gallon capacity toilet working out for you? I have to flush mine multiple times to avoid plugging it up. That didn't used to happen when we were allowed bigger toilet tanks.

But hey, we'll be able to see it quite nicely in a few years with the mandatory light bulbs G.W. Bush decided we needed to start using.

This is courtesy of the Daily Mail online site via the Goomba News Network.

Families are facing a nightmare future of recycling confusion.

In a regime set to spread across the country, residents are being forced to juggle an astonishing nine separate bins.

There has already been a storm of protest with warnings that the scheme is too complex and homes simply don't have the space to deal with the myriad bins, bags and boxes.

The containers include a silver slopbucket for food waste, which is then tipped in to a larger, green outdoor food bin, a pink bag for plastic bottles, a green bag for cardboard, and a white bag for clothing and textiles.

Paper and magazines go in blue bags, garden waste in a wheelie bin with a brown lid, while glass, foil, tins and empty aerosols should go in a blue box, with a grey wheelie bin for non-recyclable waste.

The strict regulations have been introduced as councils come under growing pressure to cut the amount of household rubbish they send to landfill.

However, they go far beyond anything previously expected from householders and families.

Retired teacher Sylvia Butler is already being forced to follow the new rules.

She said: 'I'm all for recycling and used to help educate the kids about it during my geography classes but expecting us to cope with nine different bins and bags is asking too much.'

Pressure on councils to enforce recycling schemes includes rising taxes on everything they send to landfill and the threat of European Union fines if they fail to hit EU targets from 2013 onwards.

Compulsory recycling is commonly enforced by bin police who can impose £100 on-the-spot fines for breaches like overfilled wheelie bins, extra rubbish left out, or bins put out at the wrong time.

If people do not pay the fines, they can be taken to court, where they face increased penalties of £1,000 and criminal records.

Officials in Newcastle-under-Lyme in North Staffordshire anticipated trouble when they introduced the nine-bin system last month.

They had to publish step-by-step instructions on how to fold down a cardboard box so that it fits into the green bag.

The council also put a film on its web-site in which a recycling officer demonstrates how to put a tenth container - a biodegradable liner - into the slopbucket.

Mrs Butler, 58, who is secretary of her local residents' association in Newcastle and a former councillor, said the terrace homes in her street had no gardens, yet were expected to accommodate bulky bins for garden waste.

Mrs Butler, who lives with husband Nick, 59, a retired lab worker, said: 'I have had to take my brown bin down to my allotment - there simply isn't room in my back yard to house it.'

Under the previous recycling system in the borough, householders had to juggle with the five containers that have become common in compulsory recycling and fortnightly collection schemes throughout the country.

The new system was introduced by the local council to help boost recycling rates from 26 per cent in 2008 to a target of 50 per cent by 2015.

It means only food waste is now taken each week. All other rubbish has to be stored for a fortnight before it is collected.

Mrs Butler said that whereas previously, only one wagon would collect their recycling, now up to three different lorries and crews do the job.

Samantha Dudley, 34, an office administrator from Newcastle, said recycling bags and their contents blowing in the street were a 'constant problem'.

She said: 'This scheme is supposed to increase recycling but the irony is it is creating more rubbish.

'We are on high ground and although you can tie the plastic bags up, the ones full of plastic bottles simply blow away up the street - even when they are full - if they are not weighed down.'
She added: 'I'm used to organising things with two children but even I find juggling nine different recycling bags and bins difficult. I dread to think how elderly people get on.'

Around half the country now has fortnightly collection systems imposed by town halls that prefer to compel their residents to carry out complex recycling than either organise recycling themselves in waste plants or absorb the cost of landfill taxes.

A report for the Environment Department last week revealed that the burning of household rubbish by those trying to evade recycling rules has now become the greatest source of highly poisonous and cancer-causing dioxins in the environment.

Binmen also frequently refuse to take rubbish containers they view as contaminated. Last week in Andover in Hampshire dustmen refused to take away a bin they said was contaminated with a handful of fruit pips.

A spokesman for Newcastle-under-Lyme council, which is ruled by a coalition of Tories and Liberal Democrats, said: 'If residents report litter problems to us our crews will pick it up that day.'

Some Tory-controlled authorities have been among the cheerleaders for compulsory recycling and fortnightly collections despite criticism from their own party's shadow ministers who have accused Labour of forcing councils to behave like 'bin bullies'.

A number of Tory councils are expected to continue to be among the front-runners in enforcing recycling. 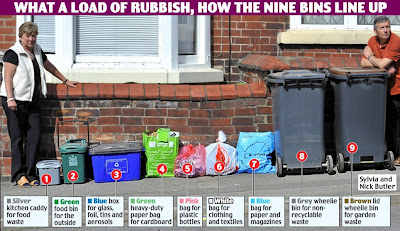 Stand by folks, it's coming our way if we don't stay vigilant and on top of the fools in Foggy Bottom.

Labels: Stupid is as stupid does, You've just GOT to be shitting me

Holy cow! That would take up half of my garage!

The idea of a "slop bucket" kinda turns my stomach. Don't they have garbage disposals in the UK? I wouldn't be surprised if they outlaw composting, too. Idiots.

And all that sorting! We are allowed to put all our paper. plastic, glass and aluminum in one can--they process and sort it at the drop off center. Making it more difficult will only make people less likely to re-cycle and more likely to dump their recyclables in some empty lot or the river.

If it were me, I would take my "slop bucket" and dump it on the steps of whichever idiot came up with this idea.

I knew I could come here this morning to finda great story! Thanks. :-)

Mary Ellen, yeah this stuff will make your eyes bleed. Thanks for the compliment, hope you're back up and blogging.

subvet- thanks, not quite up and blogging yet, but took some time to do try and do some blog visits. In addition to all the work I'm trying to catch up on, my brother who lives in CA decided to come for a week's visit starting tomorrow. I have no idea if I'm picking him up from the airport, if he's staying with me or my mom or if he will be renting a car or expecting me to drive him around. Sheesh.