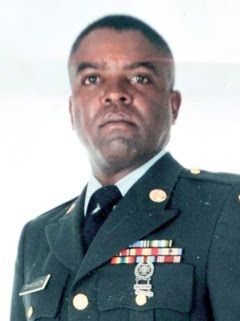 (Taken from www.thetimes-tribune.com of Jan. 21, 2010) CANADENSIS - Sgt. 1st Class Michael P. Shannon would keep a straight face while telling a joke, his family says, and it often took a moment to realize he was kidding.

Though he had a healthy sense of humor, Shannon was serious about the Army.

"He was a soldier through and through," said his wife, Donna. "The Army was his life. The only thing equal to the Army in his life was his family."

Shannon, of Canadensis, suffered a fatal heart attack Sunday while serving in Afghanistan. He was 52.

The New York City native first enlisted in 1977. He earned a bachelor's degree at John Jay College of Criminal Justice in New York, then a master's in criminal justice at Long Island University in Brookville, N.Y.

He met his wife while working as a corrections officer in New York. He retired in 2001 as an assistant deputy warden.

"His attitude was, we're all going die some way," Donna Shannon said. "No one has a master plan to avoid it, so don't use it as an excuse to not do your part for your country and your family. That's the kind of man he was."