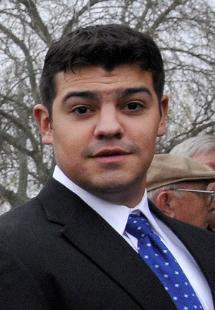 (Taken from www.mysanantonio.com of Jan. 23, 2010) Capt. Paul W. Peña, a decorated Iraq veteran described by the Army as a first-rate leader, never forgot his Texas roots and looked up his friends whenever he returned home, a family friend said.

Peña of San Marcos was killed by an explosive while on a dismounted patrol Tuesday in the Arghandab River Valley in southern Afghanistan.

Though funeral arrangements were pending Friday, friends of the family said a service and burial in San Antonio, his mother's hometown, are likely.

In a release, his regiment commander, Lt. Col. Guy Jones, said Peña “knew his example was for more than just here and now.”

“Paul was an outstanding leader and always made it a point to connect with his soldiers,” he said.

Peña, 27, showed all the signs of a promising career while he was in middle and high school at San Marcos Baptist Academy. Students voted him “most likely to succeed” and “best all-around student.”

He was a caring soul and a mentor to others, said Penni Salge, whose son attended the academy and was a year younger.

Peña built a flying disc golf course at the school as an Eagle Scout project, and helped Salge's son make music shelves in the band hall for her son's project, she said.

Peña graduated from the U.S. Military Academy in 2004, and then went through airborne and Ranger school. While with the 509th Infantry Regiment at Fort Richardson, Alaska, he served a 14-month tour as a platoon leader in Iraq that began in October 2006.

It was during that time that his mother, Cecilia Peña, and Salge, whose son was in Afghanistan, joined a support group for military mothers.

“We became ever closer friends after that. You have a tendency to bond with others that are going though the same trials, and for both of us, our only sons were going off to war,” Salge said.

Making care packages to send overseas and serving Thanksgiving meals to troops at the San Antonio USO are two of the many things the two have done through the Canyon Lake Area Blue Star Mothers, which Salge now leads as president.

As part of his duties, Peña would offer reflections on his troops killed in service. When Spc. Corey Kowall, 20, died in a vehicle rollover on Sept. 20, Peña called the Tennessee infantryman an “extraordinary individual” whose death was a blow to the unit.

“Though sorely missed, Corey will continue to be a source of inspiration and strength throughout Alpha Company,” Peña wrote in a statement after the wreck.

Salge said Peña's mother knew she'd lost her son when two soldiers, including a chaplain, came to her front door.

“Cecilia told me the first thing she saw was the cross on his uniform and she knew he was the Army chaplain, and she knew why they were there,” she said. “Our worst fears came true.”

San Marcos Mayor Susan Narvaiz has asked residents there to display their U.S. flags, large and small, to pay tribute to “a true American hero.”

“I would like to see San Marcos streets lined with American flags in his honor,” she said in a release.

My sincere sorrows, thoughts, and love to Capt Paully. He was a stand up guy and anyone who knew him in the 509th would vouch for that. Love you always, brother!