Washington D.C., Apr 18, 2010 / 07:40 am (CNA).- A federal judge’s ruling that the National Day of Prayer is unconstitutional had no legal basis and was not in keeping with American traditions of expressing “dependence on the Almighty,” critics said.

On Thursday U.S. District Judge Barbara B. Crabb in Madison, Wisconsin declared unconstitutional a 1988 federal law giving the president the authority to designate the first Thursday in May as the National Day of Prayer.

Her decision came in response to the case filed by the Madison-based atheist group Freedom from Religion Foundation, which argued it was unconstitutional because it endorses school prayer.

Judge Crabb agreed with the group, saying that atheists feel marginalized by the law, CNSNews.com reports.

Granting that many people are not harmed by the proclamation, she ruled that individuals who do not pray and feel marginalized by the government’s message of prayer suffer “a distinct harm.”

The American Center for Law and Justice (ACLJ) had represented 31 members of Congress in an amicus brief defending the National Day of Prayer.

Jay Sekulow, chief counsel of the ACLJ, said the decision was badly thought out.

“It is unfortunate that this court failed to understand that a day set aside for prayer for the country represents a time-honored tradition that embraces the First Amendment, not violates it," he commented, according to CNSNews.com.

Rep. Louie Gohmert (R-Texas), a former judge and one of the 31 Congressmen backed by the ACLJ, said in his view it was “obvious” that Judge Crabb “had not received a very good education” in American history.

He cited Benjamin Franklin’s exhortation to prayer at the Constitutional Convention and his motion that prayers be held in Congress every day.

Sekulow thought the case would “very likely” go to the U.S. Supreme Court, especially because the Seventh Circuit Court of Appeals has been “difficult at times on religion cases.”

“I think we will carry the day, but it is going to be a close case,” he continued, warning that the issue could be decided by the next appointee to the Supreme Court.

“An issue like this underscores the importance of why it's so critical for the nominee to answer direct questions about their judicial philosophy, how they view the role of judges, and their view of the rule of law,” Sekulow continued.

President Barack Obama, his press secretary Robert Gibbs, and National Day of Prayer Task Force Chairman Shirley Dobson were named as defendants in the suit. According to CNSNews.com, Judge Crabb dismissed the case against Dobson.

Dobson, the wife of Focus on the Family Founder Dr. James Dobson, also cited American history as justification for the practice.

“Since the days of our Founding Fathers, the government has protected and encouraged public prayer and other expressions of dependence on the Almighty,” she said in a Thursday statement. “This is a concerted effort by a small but determined number of people who have tried to prohibit all references to the Creator in the public square, whether it be the Ten Commandments, the Pledge of Allegiance, or the simple act of corporate prayer -- this is unconscionable for a free society.”

“ADF urges the Obama administration to appeal this terrible ruling that not only undermines the National Day of Prayer, but the underlying heritage and tradition of the American people which dates back to the nation's founding,” he continued.

In 1952 President Harry Truman signed into law a joint resolution of Congress to set aside a National Day of Prayer. Congress amended the law in 1988 to establish a more particular date.

According to the ADF, all 50 governors and U.S. presidents have issued proclamations in honor of the National Day of Prayer.

CNSNews.com said that President Obama last year issued a proclamation for the National Day of Prayer but refused to host ceremonies at the White House as previous administrations had done. He said that the statute is simply an “acknowledgement of the role of religion in American life” that is similar to other ceremonial practices that courts have upheld in the past.

Okay, so far this is just another activist judge who will probably get slapped down by the Supremes. Just MHO. But there was a picture that accompanied the story, a photo of the judge. Now for some reason I thought she looked familiar, couldn't quite place it but the face rang a bell; 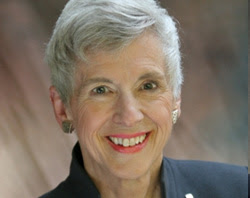 And then I remembered this shot from an old Christopher Lee flick; 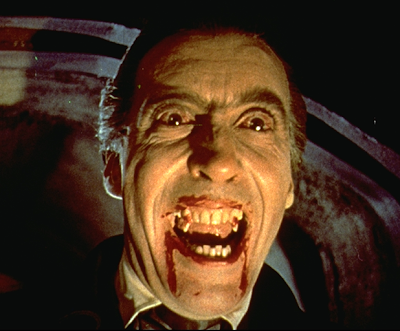 The court decision will get overturned. I wish it wouldn't. You quote the ACLJ and ADF in your piece, I'd only be surprised by their trsponses if they had come out in favor of the ruling. And the judge looks like Christopher Lee? Wow! Crushing analysis.

"trsponses"? Haven't learned to use the spell check feature I take it.

As for "crushing analysis", nope (but thanks for the compliment). I'm just bored.