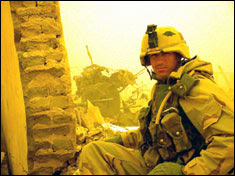 In action near the Baghdad Airport on April 4, 2003, Smith, a Soldier in Company B, 11th Engineer Battalion, working with units of the 3rd Infantry Division, was tasked to build a compound to hold enemy prisoners, when his small force came under attack by more than 100 enemies.

Smith threw two grenades and fired rocket launchers at the enemy before manning a .50-caliber machine gun on an M-113 Armored Personnel Carrier to protect his troops. While engaging an enemy attacking from three sides, Smith fired more than 300 rounds from the machinegun before being killed.

He prevented the enemy from overtaking his units position, protected his Task Forces flank, and defended the lives of more than 100 Soldiers, according to his award citation.

Smith was serving as a platoon sergeant in Bravo Company, 11th Engineer Battalion, Task Force 2-7, 3rd Infantry Division. He had been serving in the Army since October 1989.