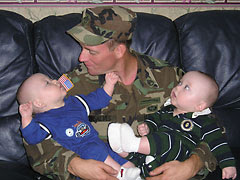 The moment of truth Julie Gonsalves dreads is still some time away — when her 3-year-old is old enough to understand that Daddy won't come home anymore.
"That's the hard part, telling Cody his daddy is gone," said Gonsalves, the 30-year-old widow of Turlock native Chad Gonsalves, a Green Beret who was killed in Afghanistan last week.
"I tried to tell Cody, but he just didn't get it," Gonsalves explained by telephone from her home in Fayetteville, N.C. "I told him Daddy wasn't coming home, he was in heaven. Cody said, 'Daddy not coming home? Silly Mommy. Daddy's coming home.'"
If it's hard for her son to grasp the grim reality, Julie understands. It's still hard for her to realize this deployment has no end. He won't be coming home to her, Cody, or twin sons Dylan and Blake.
"When the chaplain came, he was accompanied by another soldier. At first, when I looked out the door I thought it was Chad and I wondered, 'What are you doing here? You should be in Afghanistan.' Then I realized it wasn't Chad, and I knew why they were here."
Gonsalves said her husband has been gone so much in their nearly five-year marriage that "we hadn't gotten to the missing stage yet. He's only been gone a month. You don't worry about him because he always came home."
Just the other day she had to catch herself.
"I was going to e-mail him that Dylan had just said 'Daddy' for the first time. Then you realize …
"We couldn't count on the telephone, so I would e-mail him all the news. When he talked to me, that was what he always wanted to know first — 'How are the boys and what have they done new?'
"Chad was the best daddy I've ever seen," she said. "His sense of humor was great. He was even willing to change the diapers and stay up late."
Gonsalves remembered a time when her husband went above and beyond. "He changed Cody's first diaper because I was gagging. I thought 'What kind of mom am I?' and Chad just did it.
"He just always wanted to spend time with his kids."
And he loved to shower them with presents. Gonsalves said her husband told her he had two things he was looking forward to when he came back this time. He was going to potty-train the twins and buy all the boys little fourwheelers.
"He'd always say I was spoiling them. But they acted fine when I wasn't around, so he would send me out so they wouldn't whine when he wanted to play with them."
Gonsalves said talking about her husband has made bearing his loss easier.
"We met at a nightclub in Fayetteville. We both happened to be there that night. It was a freak thing," she recalled. "Chad was designated driver and watching everyone else have fun. But his eyes were beautiful, and he was funny. He could make me laugh."
They married the day after Chad earned his Green Beret.
"The next month we got pregnant with Cody," said Gonsalves. And they learned to blend her Dixie upbringing with his California style.
"We're from two completely different worlds," said Gonsalves. "We had to learn from each other."
Gonsalves said her husband was very proud of what he did.
"He was a man. He thought he was THE man," she said. "He couldn't get over to Afghanistan or Iraq fast enough. He was excited to go. He was indestructible.
"He told me not to be one of those sappy wives and start carrying on, crying or complaining," said Gonsalves. "He wasn't talking about (dying), but being deployed.
"I told him I wasn't going to cry. I'd celebrate. I'd have the house to myself. We would always kid around like that," she said.
And after a time, she noted, deployments have a rhythm. "First it was, 'Whew, they're gone.'

Then in a month you start to miss them. And then you get tired of being alone." And the reunions were always like honeymoons.
Chad left the back fence unfinished when he left.
"He was such a perfectionist," recalled Gonsalves. "But he put it off because he loved spending time with the boys.
"There were two things he was awfully proud of — being special forces and those boys."
Even though Chad won't be around physically, Gonsalves said he would forever be part of his sons' lives. "He will be thought of and talked about every day."