Yes Virginia, it's about religous freedom.

Found this on www.wsj.com:

Why the Bishops Are Suing the U.S. Government

This week Catholic bishops are heading to federal courts across the country to defend religious liberty. On Monday they filed 12 lawsuits on behalf of a diverse group of 43 Catholic entities that are challenging the Department of Health and Human Services' (HHS) sterilization, abortifacient and birth-control insurance mandate.

Like most Americans, the bishops have long taken for granted the religious freedom that has enabled this nation's diverse religions to flourish in relative harmony. But over the past year they have become increasingly concerned about the erosion of conscience protections for church-related individuals and institutions. Their top-rated program for assistance to human trafficking victims was denied funding for refusing to provide "the full range of reproductive services," including abortion.

For a time, Catholic Relief Services faced a similar threat to its international relief programs. The bishops fear religious liberty is becoming a second-class right.

Along with leaders of other faiths who have conscientious objections to all or part of the mandate, they hoped to persuade the government to bring its regulations into line with the First Amendment, and with federal laws such as the Religious Freedom Restoration Act that provide exemptions to protect the conscience rights of religious institutions and individuals.

On Jan. 20, however, HHS announced it would not revise the mandate or expand its tight exemption, which covers only religious organizations that mainly hire and serve their co-religionists. Instead, the mandated coverage will continue to apply to hospitals, schools and social service providers run by groups whose religious beliefs require them to serve everyone in need.

Continued attempts to solve the problem by negotiation produced only an announcement by the Obama administration in February that insurance providers would pay for the contested services. Since many Catholic entities are self-insured and the others pay the premiums, the bishops' concerns were not alleviated.

The main goal of the mandate is not, as HHS claimed, to protect women's health. It is rather a move to conscript religious organizations into a political agenda, forcing them to facilitate and fund services that violate their beliefs, within their own institutions.

The media have implied all along that the dispute is mainly of concern to a Catholic minority with peculiar views about human sexuality. But religious leaders of all faiths have been quick to see that what is involved is a flagrant violation of religious freedom. That's why former Arkansas Gov. Mike Huckabee, a Baptist minister, declared, "We're all Catholics now."

More is at stake here than the mission of all churches, including the Catholic Church, to provide social services like health care and education to everyone regardless of creed, and to do so without compromising their beliefs. At the deepest level, we are witnessing an attack on the institutions of civil society that are essential to limited government and are important buffers between the citizen and the all-powerful state.

If religious providers of education, health care and social services are closed down or forced to become tools of administration policy, the government consolidates a monopoly over those essential services. As Cardinal Timothy Dolan, president of the U.S. Conference of Catholic Bishops, put it, we are witnessing an effort to reduce religion to a private activity. "Never before," he said, "have we faced this kind of challenge to our ability to engage in the public square as people of faith."

With this week's lawsuits, the bishops join a growing army of other plaintiffs around the country, Catholic and non-Catholic, who are asking the courts to repel an unprecedented governmental assault on the ability of religious persons and groups to practice their religion without being forced to violate their deepest moral convictions.

Religious freedom is subject to necessary limitations in the interests of public health and safety. The HHS regulations do not fall into that category. The world has gotten along fine without this mandate—the services in question are widely and cheaply available, and most employers will provide coverage for them.

But if the regulations are not reversed, they threaten to demote religious liberty from its prominent place among this country's most cherished freedoms. That is why Cardinal Dolan told CBS's "Face the Nation" on April 8: "We didn't ask for this fight, but we won't back away from it."

This past Monday our Chief Executive was on The View where he said the following: "I’m very respectful of peoples differences on this issue” President Obama said, going on to add; “I think it’s very important for us to make sure that churches and other religious institutions have the freedom to make their own determinations about what their religious sacraments are.

What I find troubling about that last quote is the lack of specifying just who determines what constitutes "sacraments" and the absence of acknowledging the practice of religion outside a house of worship. Thus the words of Obama can be read two ways, one with the assumption that the exercise of religious beliefs must be protected since they're never explicitly addressed. The other way can see an opening for the secular state to determine what is allowable behavior in the public square.

I'm not an expert on history but I can say that in my short 59 years on this planet I've not seen this happen before. If you think the bishops always speak with one voice, think again. They may, as a body, condemn the death penalty in this country. But if you poll them individually there will be a few dissenters. They may, as a body, speak against the use of water boarding at Gitmo. But again, there will be some dissenters found if you search a bit.

There is no dissension on this topic. The entire group have spoke out individually against the HHS mandate.

That would be enough to merit a lot of attention. But wait, theres more!

Have you noticed the LACK of attention paid by John & Joan Q. Public? This is something deserving of being on the front page of every local fishwrap and every six o'clock news program. It isn't and theres no strong protest raised against the MSM's neglect here.

Remember this nationwide rally back in March: 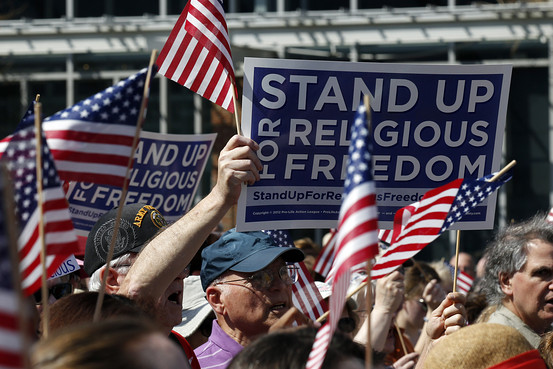 If you don't, then welcome to 1984. This was held on the 23rd of March. It attracted over 50,000 participants throughout the country. That's a hell of a lot more than the initial turnout for the "Occupy Wall Street" movement. Yet THAT group of ragamuffins got front page coverage and attention.

If a tree falls in the forest and no one is there to hear it, did it really make a sound? If a rally for religious freedom happens and isn't reported, did it ever really occur? Ask Winston Smith.

So where are we headed? I don't know but I'm not holding my breath for any real change soon. I believe we'll see an increase in attempts to silence religious dissenters. This will happen no matter who is in the Oval Office. Just my opinion.

I also expect an increase in apathy by the general public as long as the modern equivalents of "bread & circuses" are served up. Well fed drones are happy drones, they'll think and vote accordingly. Until something drastic happens, the general public will continue viewing faithful Catholics as rather strange, somewhat of a nuisance to be tolerated but not to be taken very seriously. That seems to be the attitude in many comments to stories like the one above. If you believe our peers are on fire for the defense of liberty and willing to hold the politicians accountable, think again. All too many just don't give a damn.

So I don't know about you but I'll be at the next rally for religious freedom on the 8th of June. I'll also be more of a pain in the ass to anyone unfortunate enough to hear what I say in the normal course of the day. It isn't much, it's what I'm able to do.

We live in interesting times. God help us all.