The demise of our military captured in a photo...

Okay, I'm sure everyone has seen the pic of two women sailors kissing on a Norfolk, VA. pier after one returns from deployment. It purportedly happened after they won a lottery for the first sailor to leave ship and meet their beloved. Personally, I find it nothing more than a photo op showcasing the demise of our military. We've now gone from concern of how effective our fighting forces are to how politically and morally "avant garde" they can be. God, I'm so glad to be retired with no prospect of being called back to service! 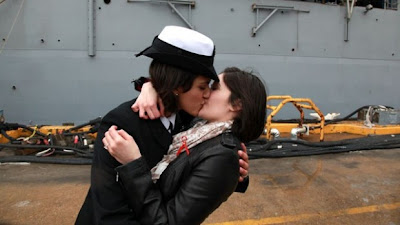 Am I the only one that suspects a set-up by the MSM on this pic?

I mean really, "Don't Ask, Don't Tell" was repealed two months ago. Is this the first ship with gay crewmembers to come home since then? Is it coincidental that the first pic of two openly homosexual military members swapping spit showcases a pair of attractive lesbians rather than two hairy, burly guys (guess which one will be more acceptable in furthering acceptance of gay practices)? How were the news organizations alerted to this? Somebody had to tip them off, the "first kiss" ceremony is routine enough in naval towns not to normally garner any interest. My guess is a squadron level Public Affairs Officer tipped the newsies on this. That had to be done with a high level endorsement. So the thinking isn't focused on the successful return of a ship after it completed it's mission, it's focused on the positive feedback from having two women publicly swap spit on a pier. This isn't treating gay members of the military as equal to their heterosexual peers, it's showcasing them for special attention. So much for "equality".

The greatest military in the world has passed from history and this photo merely documents it. Our troops are now considered acceptable only as lab rats for some sociological experimentation.

The hell of it is that this was never necessary. Despite stereotypes to the contrary, sexual orientation was never that big a deal during the last few decades. What mattered more than anything else (deservedly so IMHO) was how well a military member did their stinking job.

So you could have a complete moral reprobate enjoying the esteem of his shipmates as long as he did his job and was willing to go the extra mile to insure a successful accomplishment of the mission. Ditto for anyone who was gay, hell on one boat I served aboard we had a senior enlisted man that made no secret about being light in his loafers. Nobody cared. Everybody, including himself, referred to the man as "Swishy". The man was an excellent sailor, openly gay, kept it in his pants until he was home and life went on.

A man could be a flaming alcoholic while on liberty, as long as he performed while on duty and at sea nobody gave a damn except to cover for his butt.

My point is that the military was built on merit and conventional morality be damned. It was to be expected, especially given the disdain our troops often encountered at home during and after the Viet Nam War. For a good explanation of how the military thought and perceived life at that time I recommend Rudyard Kipling's "Tommy". Some things never change.

Nevertheless, the thinking of our military was based on merit. It worked and damned well too.

In recent years thats changed. It seems the troops have become a target of opportunity for anyone with some sort of cultural agenda. Our nation is the poorer for it as the focus shifts from success of what should be the prime mission (winning wars quickly & efficiently) to performing as a sociological petri dish.

Just the opinion of a retired enlisted man.

Ironically, those who serve really believe in civilian control of the military; otherwise there would have been a coup d'etat long ago. If the military has lost focus, it's because the civilian leaders have their head up their collective six.

That's right on the money. As long as you kept it off the job no one cared. Many gay just can't seem to realize that most of us really could give a flying *** who they're screwing, just keep it off the job. But since they are perverts it means a whole lot to them; their entire identity is wrapped up in their dicks and what they do with them.

Perverts just have to keep waving it in everyone else's face so they can feel "accepted" because they know they are operating outside of God's established guidelines for sexuality and there is no peace for them.

It;s too bad the churches and government are rife with this.

Subvet, I wonder if a lot of queers in the Navy who are a little too aggressive, will start having unexplained 'accidents' and 'mysterious' deaths happen to them?

Anthony, it isn't the first time military leadership lost their proper focus nor will it be the last. Unfortunately it won't be the brass sitting in Foggy Bottom who will have to endure the idiocy.

Sig94, we'll go from "acceptance" to having to openly advocate this "lifestyle". As for the churches and governments involvement, there'll be one hell of a housecleaning before this is set right.

scotju, I doubt it. Our military is more bound by the rule of law than many folks think. But theres a limit to everything.

Well, you can guess I don't really agree—but then, what would I learn if I only listened to people I agreed with? :)

"As long as you kept it off the job no one cared."

I cared a lot when my late boyfriend's supervisor said that he had never hired someone who was gay, and never would.

I cared a lot when we had to act like my boyfriend and I were "just friends" when there was any chance of us being seen together by people he worked with.

I cared a lot when I had to write my boyfriend's eulogy and couldn't be part of it because he wasn't out at work.

"Perverts just have to keep waving it in everyone else's face so they can feel 'accepted' because they know they are operating outside of God's established guidelines for sexuality and there is no peace for them."

Far be it for me to question your authority on what I actually believe ;), but I have no problem with who I am, and no problem with whatever other people choose to believe about it. I only have a problem with being blackmailed into silence—in my case emotionally, in his case (and in the case of soldiers under DADT) financially.

"I wonder if a lot of queers in the Navy who are a little too aggressive, will start having unexplained 'accidents' and 'mysterious' deaths happen to them?"

You have so little confidence in your armed services! Don't sell your soldiers short; they joined up to defend their country's interests, not make a political statement, and I don't see why they won't continue to do so.

Besides, they're meant to be highly disciplined and adaptable! If they can't cope with two girls kissing, how the heck are they going to manage on the front lines? :)

Jordan I'm glad you responded. To cut to the chase, I really don't care about another man's sexual orientation. But what gripes me is the primacy that orientation is given. In this particular case, the military should be more focused on how well someone does their job than who they sleep with. Unfortunately, like any other organization in the public eye, when attention is given to a controversial topic we'll see that organization bend over backwards to appear politically correct.

That can go the other way also, I'll be the first to admit. We could see the pendulum swing the other way to the point where a man who chooses to be chaste out of personal conviction could be hounded and persecuted when his shipmates believe he's gay.

But in the present situation anyone in the military who just wants to do their job will be inconvenienced by this attention given gay rights. The gay servicemembers will find themselves shunned by their hetero counterparts in order not to risk being accused of homophobia, the hetero servicemembers will stereotype all gays in the military as attention seeking trouble makers who will scream "homophobia" at the drop of a hat.

The only ones who might gain will be those who are seeking to take advantage of the sensitivity towards accusations bigotry. That will include a fair number of hetero senior officers who are more intent on feathering their nests than taking care of their subordinates of ANY sexual orientation.

We may weather this, it's happened before with other groups. But even if we do, it's just a royal pain in the rear!