No title for this one... 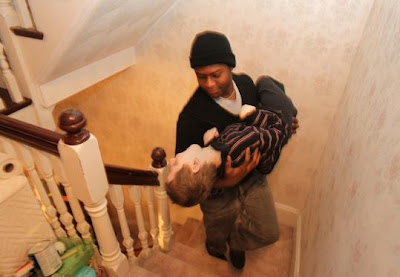 MELROSE — Everybody was waiting for Rudy.

On Tuesday night, Patty and Rick Parker were in their cramped kitchen with their 8-year-old son Ben. Dinner was over. Bedtime was near.

Ben’s twin brother, Sammy, lay on a cot in the narrow hallway just outside the kitchen. Unable to see or speak or control his limbs, he coughed or let out a little moan every now and then. Rick and Patty took turns feeding Sammy, who has cerebral palsy, through a stomach tube. He cooed when they kissed his face or stroked his cheek, and when they cooed back, he opened his mouth into a wide, joyful O.

A few feet away was the narrow, winding stairway that is the family’s biggest burden lately.

Which is where 17-year-old Rudy’s simple, life-changing act of kindness comes in.

Until recently, Rick carried Sammy up those 14 stairs to his bedroom each night. But a few months ago, Rick had major surgery for a life-threatening heart condition, and now he can’t lift much at all, let alone a 75-pound child.

“We thought Rick was going to die, and we were terrified,’’ Patty recalled. “We knew right away he had to stop carrying Sam.’’

Patty couldn’t carry him, either. Desperate, she called her pediatrician, who put her in touch with Elizabeth Paquette, the nurse at Malden Catholic High School. Paquette said she’d take care of it. The boys at Malden Catholic are taught to embrace service: She’d find plenty of students to help.

Rudy Favard was the first kid Paquette came across after that call. At Malden Catholic on a partial scholarship from the Catholic Schools Foundation, this son of Haitian immigrants was one of Paquette’s treasures. The linebacker, cocaptain of the football team and honor roll student was always willing to lend a hand.

The nurse had barely begun telling Rudy about the Parkers before he said he’d help. Another boy would fill in for Rudy on game nights. And a third boy was on standby in case neither of the others could make it.

When Paquette brought the boys to meet the family for the first time, the Parkers cried.

“Just to see this outpouring of people,’’ Rick Parker began, his eyes welling at the memory. “To see that these people were willing to put their hands and feet to what they believed. . .’’

It is profoundly isolating to have a child as severely disabled as Sammy. It’s hard even for well-meaning friends to understand the immense strain of his all-consuming needs. Patty and Rick — who tried for 8 years to get pregnant before Ben and Sam were born — grieve for one son’s lost potential every day, even as they struggle to give the other as normal a life as possible.

“You plan for your child’s future, but it’s hard to do that for Sam,’’ Rick said. “You have this pathway he should have taken, and the pathway he did take, and you don’t want to look at either one.’’

And over it all hangs the certainty that Sammy’s condition will never improve — even as he gets bigger and heavier.

Into this world of love and hurt comes Rudy. Four nights a week, he leaves his homework and makes the 10-minute drive to the Parker house. Around 8 p.m., he carries Sammy upstairs, chats a bit, hugs everybody, and heads home to finish his work. After considerable effort, the Parkers convinced Rudy to take enough money to cover gas, with a little left over.

In the few months the Parkers have known him, Rudy has become not just a help with Sammy, but a salve for their pain. He and Rick talk about football. Patty quizzes him on girls. Ben usually parks himself as close to Rudy as possible, looking up at him adoringly. And most nights, Sam will tremble with excitement as Rudy picks him up.

“It’s like family,’’ said the shy senior. It goes both ways: The Parkers were on the field with Rudy’s mother the night Malden Catholic honored its senior football players.

And so Rudy had barely knocked on the door Tuesday night before Ben was at it, jumping up and down, yelling, “Rudy is here! Rudy is here!’’

He greeted the Parkers, and went over to Sammy, gently lifting the boy’s left arm and sliding his hands under his back, the way Rudy’s father, a professional caregiver, had shown him. He lifted Sammy and held him close to his chest, and as the boy made his joyful O, Rudy carefully maneuvered him around the corners on the narrow stairway.

You couldn’t help but be struck by the painful contrast between the two boys: The robust athlete cradling the pale, helpless child; the young man preparing to go out into the world carrying someone who never will.

It’s a comparison lost on nobody, least of all Rudy himself.

“Can I ask you something?’’ he said, sitting in the Parkers’ living room after Sammy was asleep. “Is it OK if this article is more about Sam than me?’’

“He’s done more for me than I’ve done for him,’’ Rudy said. “There are times when I don’t want to go to practice, and then I look at Sam. By God’s grace, I can do what I’m doing, so I should keep it up. I’ve never been one to complain a lot, but just seeing Sam reaffirms everything, you know?’’

The Parkers won’t have Rudy for long. He’s already been accepted at four colleges, and others are courting him. Where he goes depends on financial aid and football.

The Parkers hope to be out of this cramped house and into a bigger one — with no stairs — before Rudy leaves town in search of his degree.

Until then, Rudy will bound up to the modest, pale green house on Fairmount Street. He’ll carry Sammy up to his cozy room. Then, for a little while, he’ll carry the Parkers somewhere better, too.

Hi Subvet,
Thanks for visiting. I posted a comment in answer to your question.

Almost forgot, hope you and your family had a merry Christmas.

Excellent. Thank you for sharing.

Thanks Harry. Hope you and yours have had a happy Channukah and holiday season also.

Blue, it was a pleasure to post this story.