This is beyond senseless... 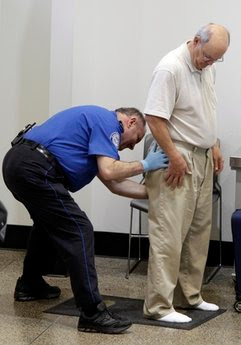 I found the above photo on Drudge, there have been others like it. The other day I sighted one where a nun is being wanded by a TSA agent wearing a hajib. That one always looked just a tad phony (it's been around for years) so I always pass on it.

But this one is undoubtedly the real McCoy.

Am I saying we should "profile"? You bet your sweet ass I am! Put the heat on those ethnic/religious groups that provide the overwhelming vast majority of terrorists in this world. Is that racist? Is that Islamophobic? Is it sexist?

You know, I just don't give a rat's patoot. One thing I know it is, plain COMMON SENSE!!

Labels: America, Nannystate in action, You've just GOT to be shitting me

Hell Yeah! Megadittoes from me as usual SV

VSO, thanks. Now if only those fools in Foggy Bottom would wake up.

Equal treatment for all is just an attempt by those who want our nation to fail to make us let everybody do what ever.

Profileing, selective checks, singling out, all these things work.

IR, we should follow the example of the Israelis. Those folk just don't give a rat's ass about being PC and risking a downed jetliner.

There's a difference between "racial profiling" and security profiling. "Racial profiling"--which probably doesn't even exist given the severity of the legal charges levied against cops who do it--is "driving while black/brown/etc." Stopping someone just because of the color of their skin or that they have that skin color and are, say, in an expensive car. I think it's fair to say we all agree this is wrong.

Security profiling, however, is not about stopping any and all Muslims for no reason other than that they "look Muslim." It's about engaging some much-missed common sense. A series of markers are assessed that then reveal a REASON to look more closely at that person. For instance, cash tickets, last minute tickets, one-way tickets, last minute one-way tickets bought with cash, known terrorist ties, known reports by the suspect's father that he is in fact a freaking terrorist . . . little things like that. Instead of these being flags, though, they are ignored, purposely. This idiocy is exactly what allowed the Fort Hood terrorist to get away with his terrorist act--no one wanted to appear to be racist or anti-Islam or whatever the hell. Bullshit. That PC stuff gets people killed. We have proof of it.

I'm ALL for profiling; it's the only thing that works. Stopping every tenth person or randomly pulling people out of the line for no clear reason is absurd. And dangerous.