On Chaz Bono and "Dancing With The Stars"

Okay, I don't watch "Dancing With The Stars" and wouldn't even if the tube in my house was still receiving televised programs. It's always sounded like a dumb idea.

But it is popular. So with that in mind I have to ask, "What the hell were the folk in charge thinking when they chose Chaz Bono to join the cast?"

Undoubtedly it was done to appeal to the LGBT community, Chaz has nothing else going besides being born a woman and now sporting the genitalia of a man. Thats it.

But couldn't they have selected someone who doesn't look like the "Before" picture of a Weight Watchers ad? I mean really, if old Chaz ever had to haul ass then he/she would have to make two trips! 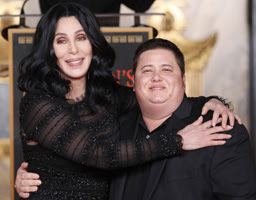 UGH!! What a tub of lard! I hope wherever the actual dancing is done, the studio isn't atop any seismic fault lines.

Plus, didn't that dimple on Cher's chin start out as her navel? There should be a limit on the number of facelifts someone can have.

The thing about female to male gender surgery--they can't make the hydraulics work--ol Chaz has something vauguely like male genitals, that do not function unless a nylon rod is inserted, or other similar system is employed. it's not even a good strap on.

Apparently, Chaz has decided not to do the surgery b/c it hasn't been perfected, thus is still sporting girl parts yet declaring herself to be male.

I don't know what's worse, that she's so full of hatred for her own natural gender that she'd pay to have doctors turn her from a pretty female to a really ugly male...or that TV execs would inflict upon the rest of America the sight of her attempting to dance.