Unfortunately they don't deliver to Texas: 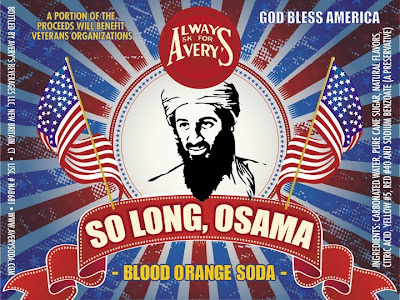 And here's the link to their site: http://www.averysoda.com/

Plus a story from the local fishwrap; The New Britain Herald:

Flavored “blood orange,” the carbonated concoction is yet another marketing brainchild of Avery’s owner Rob Metz. Ever since the 2008 presidential election and the advent of the “Barack O’berry” and “John McCream” sodas, Avery’s has created limited runs of specialty sodas, taking advantage of current events — from Tiger Woods and the Gulf oil spill to the recent British royal wedding.

The latest flavor — prompted by the killing of terror mastermind Osama bin Laden by Navy SEALS — may be Avery’s most controversial. Metz himself had some reservations on releasing it.

“We’ve gotten a couple phone calls,” Metz admits, “a bunch of hits on the Facebook page, some pro, some con, but mostly pro.”