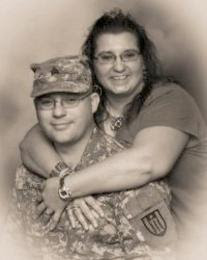 (The following was taken from www.startribune.com of Apr. 7, 2010) Heading home to the waiting Army chaplain and sergeant, Lyle Kruize clung to the hope that his son in Iraq was OK.

"I knew those guys weren't just coming to visit," Kruize said. "When I came into the
house, I knew."

Army Reserve Sgt. Kurt E. Kruize, 35, of St. Cloud, died Sunday after apparently being crushed between two trucks during his second tour of duty. The chaplain and
sergeant who came to break the news had few details and said the Army is investigating, Lyle Kruize said.

"They called it a freak accident," he said. "From what I was told, he was standing
between a trailer and a truck, so we're presuming he was crushed."

"It's hard when you know you're never going to see him again," Lyle Kruize said.

Growing up in Hancock, a small town about 100 miles west of St. Cloud, Kurt Kruize
spent endless hours outdoors, fishing and hunting. He would fish the nearby lake from early morning to dark if his parents let him,his father said. As soon as he could hunt, "dad got skunked and son got a nice four- or six-point buck," his father recalled.

Kurt Kruize joined the Army Reserve while he was a junior at Hancock High School,
where he played football and basketball. "He always talked about wanting to go into the service," Lyle Kruize said. "He said, 'I want to serve my country, Dad.'" After he graduated in 1993, he went into basic training and served in the 367th Engineer Battalion headquartered in St. Cloud. "He always liked what he was doing regardless of what they had him do," he said.

Lyle Kruize said his son was first deployed to Iraq five or six years ago and worked as a fuel truck driver. "He didn't talk a lot about it except to say there was intense combat at times."

When he was called again for deployment to Baghdad in January, Kurt Kruize didn't flinch. It was tough leaving his four children -- 13-year-old Austin, 10-year-old Annabelle, 5-year-old Raven and 2-year-old Tamika --and his wife, Billie Jo, Lyle Kruize said. "'But my country has called me again,'" he remembered his son saying.

"Those kids were his pride and joy," Lyle Kruize said. Together they would craft
wooden toys and play games.

He worked for Viking Coca-Cola Bottling Co. in St. Cloud, his father said. "I presume he was going to stay in the Reserves until he got his 20 years."

Funeral arrangements are pending. Kurt Kruize's body arrived at Dover Air Force
Base in Delaware on Tuesday. In addition to his wife, four children and father, Kurt
Kruize is survived by his mother, Beverly Kruize of Hancock; a brother, Darren of
North Carolina; two sisters, Tammy Angrimson of Paynesville and Kari Stadfuiss
of Big Lake; and a niece, Torrie Kruize of Paynesville.