Every Catholic boy's source of PTSD, but it'll keep you in line! 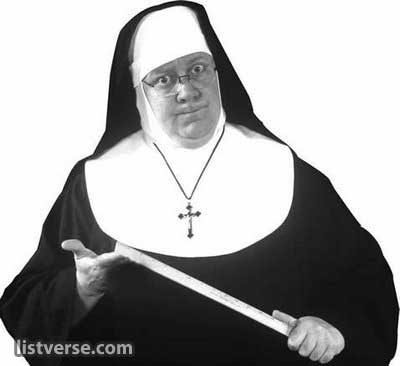 TEMPLE, TEX. -- In an era when students talk back to teachers, skip class and wear ever-more-risque clothing to school, one central Texas city has hit upon a deceptively simple solution: Bring back the paddle.

Most school districts across the country banned paddling of students long ago. Texas sat that trend out. Nearly a quarter of the estimated 225,000 students who received corporal punishment nationwide in 2006, the latest figures available, were from the Lone Star State.

But even by Texas standards, Temple is unusual. The city, a compact railroad hub of 60,000 people, banned the practice and then revived it at the demand of parents who longed for the orderly schools of yesteryear. Without paddling, "there were no consequences for kids," said Steve Wright, who runs a construction business and is Temple's school board president.

Since paddling was brought back to the city's 14 schools by a unanimous board vote in May, behavior at Temple's single high school has changed dramatically, Wright said, even though only one student in the school system has been paddled.

"The discipline problem is much better than it's been in years," Wright said, something he attributed to the new punishment and to other discipline programs schools are trying. Residents of the city's comfortable homes, most of which sport neighborly, worn chairs out front, praise the change.

"There are times when maybe a good crack might not be a bad idea," said Robert Pippin, a custom home builder who sports a goatee and cowboy boots. His son graduated from Temple schools several years ago.

Corporal punishment remains legal in 20 states, mostly in the South, but its use is diminishing. Ohio ended it last year, and a movement for a federal ban is afoot. A House subcommittee held a hearing on the practice Thursday, and its chairman, Rep. Carolyn McCarthy (D-N.Y.), is gearing up for a push to end the practice once and for all. She plans to introduce legislation within weeks.

"When you look that the federal government has outlawed physical punishment in prisons, I think the time has come that we should do it in schools," she said.

A joint American Civil Liberties Union-Human Rights Watch report last year found that students with disabilities were disproportionately subjected to corporal punishment, sometimes in direct response to behavioral problems that were a result of their disabilities. Many educators and psychologists say that positive tools, such as giving praise for good behavior and withholding it for bad, are far more effective for discouraging misbehavior.

Those techniques "encourage them to behave well in the future," said report author Alice Farmer. Paddling "makes students lose respect for their teachers."

Rules about paddling vary from district to district, but typically only administrators, not teachers, can mete out the punishment, which is done in private. Usually, a long, flat wooden paddle is used to give as many as three blows across the student's clothed rear end, although Farmer found students who had been hit many more times. Boys are overwhelmingly the target.

Not everybody in Texas is gung-ho about paddling. The practice has been banned in the state's big cities, and its use varies from campus to campus in districts that allow it.

In Alvin, a formerly agricultural city of 23,000 that has been swallowed by Houston's suburbs in the past decade, the policy is on the books but not used in many schools.

"I don't think it's that simple anymore," said Terry Constantine, who added that she hasn't swung a paddle in her 16 years as an elementary school principal there. "We look for our parents to work with us now."

At Alvin High School, where the technique is used, Principal Kevon Wells said he had paddled students about six times this school year. If a student continued to misbehave, he said, he wouldn't do it again. "I'm not into beating kids," he said.

But in Temple, a city just outside Fort Hood that shakes with the air horns of the trains that pass through its rail yards, many residents say they hope that the old-fashioned solution can address what they see as rising disrespect among youth. They say their discipline problems aren't different from those in any other school system in the country: students showing up late for class, or violating the dress code, or talking during lessons. Those habits were unheard of in the days when schoolteachers routinely swung a paddle, they say.

"Back then, you wouldn't throw spitballs, because you were afraid of the consequences," said Darr Kuykendall, a worker for a plumbing supply company.

"A lot of kids have tempers," said Abby Jones, a junior at Temple High School. "Those kids that would be paddled would think of it as a threat . . . and maybe would be better."

Parents also pushed for the change because many paddle their children at home and wanted consistent discipline in the classroom, said John Hancock, assistant superintendent of administration for the Temple schools, who has been an educator for more than 40 years.

"We're rural central Texas. We're very well educated, but still there are those core values. Churches are full on Sundays," Hancock said. "This is a tool we'd like in the toolbox for responding to discipline issues."

Hancock, an urbane, sturdily built Colorado native who wears horn-rimmed glasses, said the school system had banned corporal punishment about six years ago because a state law change made what was permissible uncertain. Follow-up made clear that schools could paddle, he said.

Since the policy was changed in May, the school system has paddled only one student, and that was at the request of his parent, Hancock said.

Many districts, including Temple, which is nearly evenly divided among white, black and Hispanic students, require parental consent before the punishment is given. Temple also requires the student's consent, Hancock said, and the punishment is considered equivalent to an out-of-school suspension.

Residents said restoring paddling is less about the punishment and more about the threat.

"It's like speeding," said Bill Woodward, a graphic designer. "Are they going to give you a speeding ticket, or . . . a warning? I'd speed all day if I knew it was going to be a warning."

Yep, as my paternal grandmother was oft quoted as saying, "If you pat them low enough, hard enough, they'll behave."

FWIW, I believe every child is different. Some you can easily put through college, others you'll need to put through a wall.

About this very topic from Msgr. Charles Pope (no relation to guy in Rome)

Rick, very good article. Thanks for passing it along.