There are two atheist asshats, Richard Dawkins & Christopher Hitchens, who are trying to arrange for the Pope's arrest when he visits the UK.

Assume for the moment someone would seriously attempt that (We're in Twilight Zone territory here, it's a slow day and I'm bored).

Those Swiss Guards in his security detail might be a problem. Even if they don't get violent you can bet they'll insist on being incarcerated with the Pontiff. Kind of makes for a crowded jail cell. Then theres the problem of accommodating the religious beliefs of the accused. Since that includes saying Mass, he'll need wafers of unleavened bread and I'm sure sacramental wine isn't just a bottle of Mad Dog 20/20 or Night Train taken off the nearest package store shelf. Then there are the requirements for proper vessels (chalice, paten, etc), vestments (and their cleaning), the list goes on and on.

Once those items are satisfied you'd be dealing with the complaints of other prisoners who don't appreciate all the commotion and supposed favoritism. Not a good time to be the jailer.

That's just the start. There is also a small problem of the Catholics both in the UK and worldwide taking exception to this. In the more hotheaded nations there would be British embassies stormed or bombed. I don't see a lot of cooperation in other parts of the world either. As an example; if every Catholic in NYC boycotted the British delegation to the UN it might get uncomfortable. If nothing else, they'd have a hard time getting decent pizza. Likewise in DC and other major cities where there's a representative of Her Majesty's government.

You can bet there would be some complaints from other religious leaders also, they'd look at the arrest of the Pope and start worrying about themselves.

Yeah, not smart at all. And don't forget, Catholics in this life are known as the Church Militant; 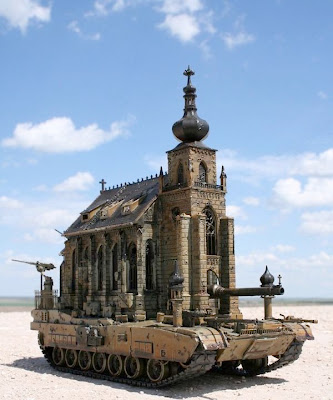 Whats really amazing is that this story is even making the news. I guess it's a slow day all over.

You forgot to mention the fact that the Pope is not only the head of the Roman Catholic Church, but the head of a Sovereign State with diplomatic immunity.

MM, kind of sends a message.

Rev. Gregori, too true. According to the news articles about these two fools, their lawyers (and who is surprised to find lawyers involved?) think they can pull it off because the Vatican isn't recognized as a nation by the UN. I just posted on this because as I said, I was bored. REALLY bored!