I saw this picture the other day at Divine Ripples, it's appropriate for the story that follows; 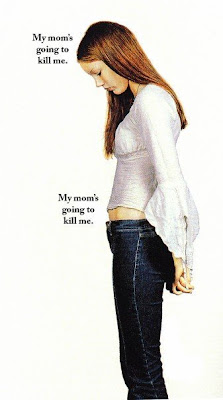 SEATTLE -- The mother of a Ballard High School student is fuming after the health center on campus helped facilitate her daughter's abortion during school hours.

The mother, whom KOMO News has chosen to identify only as "Jill," says the clinic kept the information "confidential."

When she signed a consent form, Jill figured it meant her 15 year old could go to the Ballard Teen Health Center located inside the high school for an earache, a sports physical, even birth control, but not for help terminating a pregnancy.

"She took a pregnancy test at school at the teen health center," she said. "Nowhere in this paperwork does it mention abortion or facilitating abortion."

Jill says her daughter, a pro-life advocate, was given a pass, put in a taxi and sent off to have an abortion during school hours all without her family knowing.

"We had no idea this was being facilitated on campus," said Jill. "They just told her that if she concealed it from her family, that it would be free of charge and no financial responsibility."

T.J. Cosgrove of the King County Health Department, which administers the school-based programs for the health department, says it's always best if parents are involved in their children's health care, but don't always have a say.

"At any age in the state of Washington, an individual can consent to a termination of pregnancy," he said.

But Jill says she not only didn't have a say in her daughter's abortion, but also didn't know about it.

"Makes me feel like my rights were completely stripped away."

Why should a 15 year old girl have the ability to judge the pros & cons of killing her baby? The fact that she's pregnant in the first place renders her judgment suspect.

A kid of that age can't get a tattoo, can't buy cigarettes, can't buy booze, can't drive a car in most states, can't enlist in the military, can't work a full time job, can't get a credit card, etc. and etc. But killing a baby is no big deal and would involve less parental involvement than getting a paper route.
I guess the worship of Moloch is justifiable for any age.
This garbage is happening in other parts of our nation, so maybe theres nothing to be shocked about. Maybe it's something they put in a newspaper on a slow day, along with the "man bites dog" stories.

But I don't ever want to get so morally numb I can't be outraged by this crap.

Labels: Cultural cesspool, You've just GOT to be shitting me

Many words comes to mind when I see a story like this SV, but few are printable with clergy reading this.

reason #1,001 for Catholic or homeschool.

Welcome back!
Your comment about the girl being pregnant at 15 and her judgment pretty much sums it up. How in the hell can a school allow this to happen? They should fire the whole damn staff of supervisors and the school board!
IMHO, of.

VSO, many clergy would be thinking what you'd be saying.

Pops, thanks for the welcome back and the affirmation of my thinking.

This is just sick. I'd also like to add that for any child, even as a senior in high school, has to have a permission slipped signed by a parent in order for them to go on any type of field trip...but they can stick a student in a cab during a school day and allow her to have a major medical procedure done on her without the parent's consent?

What did the medical center tell the school in order to have her excused from classes that day? Someone in that school had to know something was up, they aren't stupid, they're just acting like it to save their sorry, murdering asses.

This just makes me sick.