International Planned Parenthood teaching girls how to have fun...

March 16, 2010 (LifeSiteNews.com) – Last week the Catholic Family and Human Rights Institute (C-Fam) issued a controversial report in its weekly Friday Fax, claiming that Planned Parenthood was permitted to distribute an explicit ‘sex guide’ at a closed-door, "no-adults-welcome" meeting at the UN sponsored by the Girl Scouts.

In an interview with LifeSiteNews.com (LSN) Tuesday, however, a representative of the Girl Scouts denied the story, saying that no such pamphlet was distributed or made available to the girls in the meeting, and that the only document that was present in the room was the document the girls were working on.

C-Fam in turn, however, has issued an update on the situation, saying that they stand by their story, and presented new evidence to back it up. In an interview with LSN, Austin Ruse, the President of C-Fam, charged the Scouts with "lying" in their denials, and pointed out that a "stack" of the Planned Parenthood brochures were found in the conference room where the Scouts' meeting took place, literally moments after the meeting broke up.

The brochure, "Healthy, Happy and Hot," goes on to tell youth that laws requiring HIV-positive people to reveal their status to their partner(s) “violate the rights of people living with HIV.” It says, “There are many reasons that people do not share their HIV status. … They may worry that people will find out something else they have kept secret, like they are using injecting drugs, having sex outside of a marriage or having sex with people of the same gender.”

But in an interview with LSN today Michelle Tompkins, a media spokesperson for the Girl Scouts, denied C-Fam's account of what happened, saying, "At no time did Girl Scouts give out anything.”

Instead Tompkins suggested that the Planned Parenthood brochure may have been left behind by some prior meeting held in the room. "We do know that [the pamphlet] was not in there while the girls there, but the rooms were not 'sterilized' afterwards, and someone might have brought them in after," she said.

When asked point blank whether Planned Parenthood was involved with the Girl Scouts meeting in any way or was permitted to make materials available to the girls, Tompkins responded, "Not at all."

"This is where there could be a gray area," she said. "When our girls arrived there was nothing there. Say she (the pro-life woman who found the pamphlet) came into the room an hour later, we had no say who came in there or left anything. The only material was that one form that the girls were working on themselves, in that meeting."

Austin Ruse, however, told LSN that the source for the story was Sharon Slater, a mother of seven and the president of the UN pro-family group Family Watch International. According to Slater's account, she was kicked out of the conference room when the meeting began, but she "waited around until the meeting was over, and when the doors opened she walked in and looked at the literature that was being passed out on the literature table." That's where she found the offending Planned Parenthood brochures.

Slater confirmed this account with LSN in an interview. She told LSN that she had targeted the Girl Scouts meeting specifically because she had heard that questionable things had happened in similar events last year. She also said that she obtained a draft document of the statement that the girls were working on in the meeting, which was to be read before the general assembly, and which had the girls "calling for more information on 'reproductive health.'" In UN-speak, "reproductive health" typically includes access to abortion.

Additionally, C-Fam has said that the idea that the Planned Parenthood pamphlet was simply left in the room from a prior meeting doesn’t hold water, since none of the four meetings that were held in the room earlier in the day had anything to do with adolescents – the very clear target of the sex guide.

After being told about this updated account by C-Fam and Slater of when and how the pamphlets were found, Tompkins responded simply, "We cannot verify that at all. That we would say is not true."

Ruse countered, however, saying that the Scouts are "lying." "All I can say is that we stand by our story," he said.

In its update e-mail today, C-Fam said, “The Girl Scouts have an obligation to their members, to the girls and their parents to disassociate themselves from this dangerous Planned Parenthood sex guide for teenagers.”

As one example, C-fam observes that in 2004 during an interview on the Today Show, Girl Scout CEO Kathy Cloninger said that “we partner with many organizations. We have relationships with our church communities, with YWCAs, and with Planned Parenthood organizations across the country, to bring information-based sex education programs to girls.” 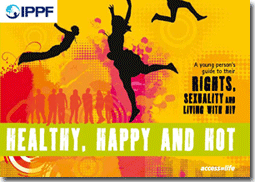 While I'll always believe there are two sides to any story I'm also of the mind that where there's smoke, theres fire.

Keeping that in mind, can anyone tell me why this sort of controversy is NEVER heard of within the Boy Scouts? Yeah, I don't think any boys want to be "Healthy, Happy & Hot" but there are certainly other areas where our present day cultural cesspool could infect an organization known for it's wholesome values.

I've my own thoughts as to why, mainly that there aren't too many on-fire libs waiting to rise to the top levels of the BSA so they can pass on their beliefs to the innocent.

SV I knew of a girl in St. Paul, MN whose Gold Award project was S&M. I kid you NOT! The Trophy Wife accused me of making that up.