A real snowjob of a proposal...

Found this via Breitbart.com at http://www.fox8.com/; 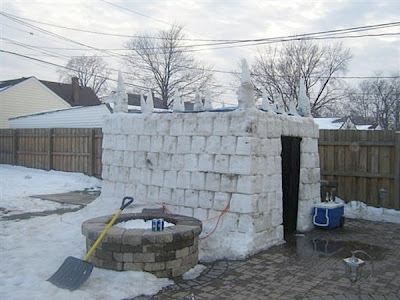 PARMA, Ohio (AP) — An Ohio woman has received a marriage proposal like something out of a frosty fairy tale, in a castle her boyfriend built from snow.

Ryan Knotek (NOH'-tehk) says he wanted to pop the question to Christi Lombardo in a way that was special and would give her a story nobody else had. So, he made blocks out of snow in the Cleveland suburb of Parma, where they live, and assembled a one-room, one story palace complete with pointed spires on the roof.

On the inside, Knotek set up candles, rose petals, wine — and a portable heater.

The cold castle and all the trimmings were warmly received by Lombardo when she arrived on Sunday. She answered the proposal with a yes.

Oh great, now all the women will want one. Thank God I live in Texas, we've had over a foot of snow this year but it's gone now!

we here in Ohio and all of the other states that get heavy snow,get quite creative.GO BUCKS!!!!!!!!

I thought there was a new White Castle under construction! I'm disappointed.

Arby, White Castle must be pretty old, my mother (now 82 yrs. old) used to talk about getting their burgers.

Like Mike says when you live in the snow belt and are cooped for days, weeks and months at a time your mind runs rampet. You don't even need drugs to make you brain go into overload.

you'd better get building there buddy.