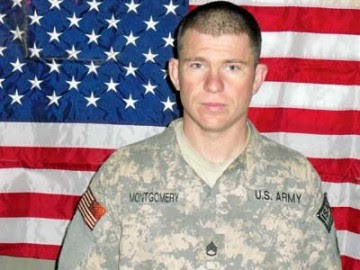 (Taken from decaturdaily.com of Jan. 23, 2010) The Department of Defense has confirmed the death of U.S. Army Staff Sgt. Thaddeus S. Montgomery II, a former Decatur resident.

In a statement released Friday, the Defense Department reported Montgomery died Wednesday from injuries sustained in a non-combat related incident at an outpost in Afghanistan’s remote Korengal Valley.

A public affairs officer at Fort Carson, Colo., where Montgomery’s unit was based, declined to comment, saying circumstances surrounding the incident were still under investigation.

But an early report from Arizona Highways, a publication Montgomery corresponded with during his military service, said he had been shot and killed in the line of duty.

According to an Army release, Montgomery served two tours in Iraq before being deployed to Afghanistan in June 2009. He received 20 service awards, including two Army Commendation Medals and an Army Achievement Medal.

The Army listed his current home of record as West Yellowstone, Mont.

Friends of the family said Montgomery would be buried at Arlington National Cemetery, but a funeral date had not been scheduled.

Meanwhile, they have planned a local gathering of friends to take place in his honor at 5 p.m. Sunday at Sykes on Bank Street.

In an open letter sent to The Daily, family friends asked for public assistance in honoring a request from Montgomery that his fiancée, Erica Yih Shu Wong of Malaysia, be present at his burial in the event of his death.

The two were reportedly in the process of applying for a visa so Wong could travel from Malaysia to the United States, where they planned to wed. A family friend, Lucy Schrimsherof Decatur, said Wong now needs an emergency visa to attend the funeral.

The letter requested the public e-mail the U.S. Embassy in Malaysia at embassyklpa@state.gov and klacs@state.gov, as well as state and federal officials to bring attention to the situation.

“Thad fought for our right to have a voice. Honor his ultimate sacrifice, and please use your voice to help Erica,” it read.

Montgomery is reportedly survived by a 3-year-old son, Thaddeus Montgomery III of Cullman.

Other survivors include a sister, Stephanie Montgomery of Atlanta, and a brother, Dustin Border of Madison, according to friends.