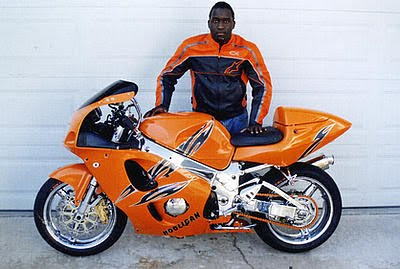 (The following is taken from www.pe.com of Dec. 29, 2009) Lance Cpl. Omar G. Roebuck had four great loves: His family, his boxing, his stunt bikes and serving in the U.S. Marine Corps.

Roebuck, 23, of Moreno Valley, died Dec.22 in an accident in Afghanistan. He had dreamed of becoming a CHP helicopter pilot.

"I wasn't afraid of him getting killed in combat," said his father, John Roebuck, 54, of Moreno Valley. "I just never thought he would go like that."

He said his son, a diesel mechanic, was crushed while working on a new assault tank. "This is so hard," John Roebuck said. "The only way to look at it is that God wanted Omar in his presence."

Omar Roebuck was more than just a next-door neighbor to Pat and Connie Tatum, who have three sons. "He called me 'Mom'," said Connie Tatum, 46, tears running down her face. "Omar was wonderful, funny, smart. He always had a smile on his face. He loved my enchiladas. He was like another son to me."

She said she tried to discourage Roebuck from enlisting last year. "But he said, 'Mom, the Marine Corps will give me an education and a better life.' And he loved it."

Pat Tatum, 48, described Omar Roebuck as his mentor, best friend and street biker buddy. "He was very wise for a kid his age," he said. "His father would allow him to think for himself."

John Roebuck said he raised Omar and his sister as a single parent for the last 11 years. The three were exceptionally close, especially father and son, who rode street bikes together since Omar was four. Omar called him, "Pops." His sister Eboni, 27, of Barstow, jokingly called Omar "Fat Boy" because he was in excellent shape.

"My son continues to shine even in death," John Roebuck said. "His battalion commander told me he was a great soldier."

Omar Roebuck was promoted to lance corporal on June 2. He received the National Defense Service Medal, the Afghanistan Campaign Medal and the Global War on Terrorism Service Medal.

"I don't have the words to say how proud I am of him," his father said.

Pest in Peace you great warrior.